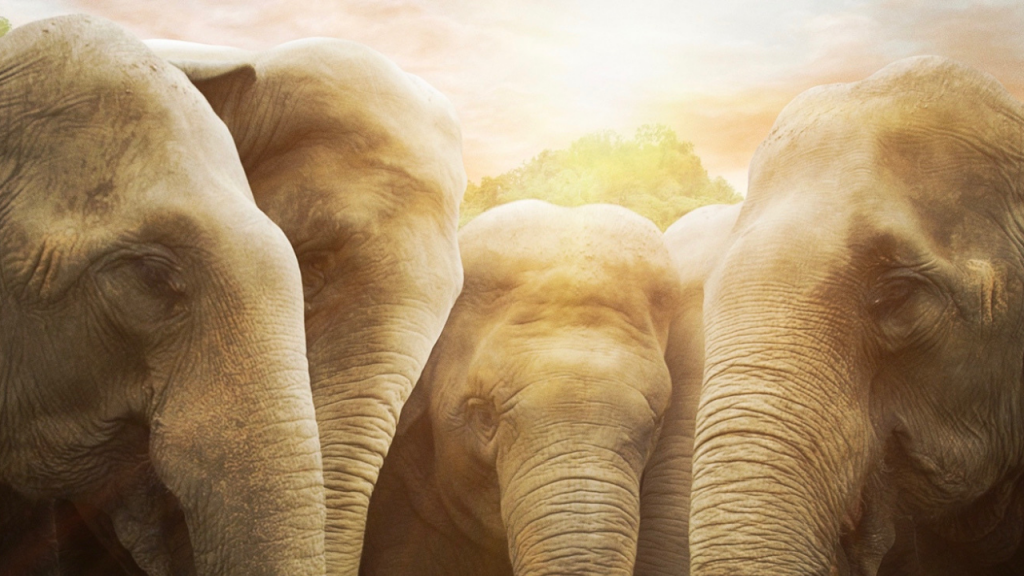 The animal we recognise today as an elephant, Primelephus, appeared only in the last six million years. It is widely thought of as the source of the three genera of modern elephants: Elephas, the Asian elephant; Loxodonta, the African elephant; and Mammuthus, the hairy elephants who survived until the end of the last ice age and are now found only under the Siberian and Alaskan ice.

Elephants are good to imagine. They are our greatest land mammal — our megafauna — our biggest and most beloved beasts. They stimulate the senses and unleash our imaginations — inspiring great poetry and art. There are few things in the world that move us in quite the same way as that great curling trunk, those softly padded feet and those lashed and soulful eyes.

Elephants and humans have the same lifespan. They raise their young and mourn their dead — maintaining close familial bonds throughout their long lives. They live together in matriarchal herds, foraging and playing — roaming many miles a day under a shady canopy to bathe beneath the stars.

Once upon a time elephants roamed England. The clue is in the vegetation. Trees re-sprout when broken and survive twisting and trampling. Hawthorn and blackthorn evolved long thorns to defend themselves against beasts much larger than badgers.

Elephants are difficult to count owing to their uncanny ability to fade silently into the forest. In Thailand it is said that of their original population of 100,000, there are only 3,000 left  — at least half of whom are being exploited in some form of captivity. Deforestation and poaching for body parts threaten the rest. Due to their two year gestation period, they cannot reproduce as fast as they are being killed. They will not survive without our help.

There are elephants everywhere in Thailand — figuratively not literally. Figuratively, they are worshipped. Literally, their numbers have fallen astonishingly low. When I was living in Thailand nearly twenty years ago, I knew none of this. I could not have spotted the difference between an Asian and an African elephant if they passed me in the street. What I did know was that I wanted to be close to them; to see them in their natural environment. I was fortunate enough to stumble across the Elephant Nature Park office in Chiang Mai, where I booked volunteer work at their camp, an hour north of the city. Off I went into the foothills of the Himalayas, on an adventure I would never forget.

Elephant Nature Park is just what it promises to be: acres and acres of elephants being elephants.

Unfortunately, at the time it was the only camp like it in Thailand. The park's founder Sangdeaun ‘Lek’ Chailert, was born in the small hill tribe village of Baan Lao. As a young girl, she watched elephants working in the local logging operations and felt their suffering deeply. She watched her grandfather, the local shaman, heal sick and injured animals that were brought to him, and she helped him with his work. He taught her about healing through nature, and she determined to dedicate her life to creating a home for all animals. The rest of her family, however, ran a trekking camp. When she revealed the cruelty and abuse going on behind the scenes, her family disowned her on public television. She has been threatened, raided, arrested, exiled and named an enemy of the state. Nonetheless, she continues her work: her endless compassion and indomitable spirit touching people and animals all over the world.

I was one of only three volunteers at the time, so I was lucky enough to spend two whole weeks with Lek; learning, shucking corn and making rice milk for an orphaned baby elephant whose mother had been shot. I will never forget the sound of a two hundred pound baby trumpeting for milk every two hours through the night. I even accompanied Mae Perm, Lek’s first rescued elephant (pictured below) and her herd, into the jungle to camp overnight. Mae Perm was lucky. She died old and free and standing next to her best friend, a blind elephant named Jokia. Together they found freedom after slavery: life after despair.

Most of the elephants Lek saves are old or injured. Some have stepped on land mines left behind after our wars and nearly all are mentally disturbed. Lek has now rescued over 200 elephants, as well as dogs, cats, buffalos and many other species. She has been recognised the world over. In 2001, the Ford Foundation, together with National Geographic, named her a 'Hero of the Planet'. In 2005 she was named Hero of Asia by TIME magazine for her work in conservation.

Lek has featured in documentaries produced by National Geographic, Discovery, Animal Planet and the BBC. In 2003, the National Geographic documentary ‘Vanishing Giants’, highlighting Lek’s work with the Asian elephant, was recognised by the Humane Society of the United States with the Genesis Award.

Lek advocates a ‘Saddle-Off’ programme, where the animals are not made to work, in any form and visitors participate actively in their care. Lek doesn’t use bullhooks to control them, she guides them with love and bananas. Unfortunately, at the time of my visit she stood alone. Her methods were unique. The baby elephant I'd looked after was poisoned and died. I returned home wounded; overwhelmed with the sheer scale of what Lek was up against. I found the reality difficult to deal with.

The situation in Thailand is complicated. Thailand has a long history of elephant labour in agriculture and industry. After the catastrophic floods in 1989, as a result of irresponsible logging, the Thai government ended the tradition of using elephants for legal logging, resulting in thousands of elephants and their mahouts turning to illegal logging or resorting to elephant tourism.

There are around 450,000 African elephants left, but only 45,000 Asian elephants. Asia is not like Africa. The biggest problem lies not in hunting, but in servitude. Regardless of their size, elephants' spines are not made to support the weight of humans. Trekking camps, street begging, circus acts, painting and logging are all completely unnatural acts for a wild animal to participate in. These things come at an extraordinarily high cost to the elephant. I believe that if people were aware of that cost, they would never participate in any of them.

There is no such thing as a domestic elephant. Every elephant has at least one wild parent. Elephants are fierce, wild animals. For them to perform circus tricks, paint, or carry humans on their backs, every elephant must all go through a brutal process known as phajaan, or ‘the crush’.

This process involves a baby elephant being taken from its mother, some of whom fight to the death to prevent their babies being taken. The baby is then tied into a small box where it is unable to move or raise its head. It is beaten day and night often with sharp objects, deprived of food, water and sleep and screamed at relentlessly until the love of the mother is replaced by the fear of man.

Some trekking camps perpetuate the story that elephants would rather be performing tricks or lugging around heavy humans in metal seats, than be free in the jungle. Others put the elephants relentless swaying down to ‘dancing’. The elephant is not dancing. Swaying is an outward sign of the mental disturbance caused by being chained to a post all day, instead of a natural life spent walking and roaming free.

“Riding elephants perpetuates the industry,” says Vicki Brown, editor at Responsible Travel. “It increases the demand for captive elephants to be used as attractions — which means more baby elephants must be captured from the wild, or sometimes bred for a life of captivity.”

I made trips back to the park and while the reality is grim, Lek continues her groundbreaking work. I never forgot what I witnessed during my time there, and nearly twenty years later, I found myself hiring a cinema to co-host a screening with my son, Atlas. The movie we played is called Love & Bananas, a documentary by American actress, Ashley Bell. This deeply moving film tells the true story of Noi Na, a 70-year-old blind elephant who is rescued from a trekking camp by Lek and brought to freedom at her park. The film follows this journey of courage and compassion whilst highlighting the plight of captive elephants in Asia.

Love & Bananas is a heartbreaking, heartwarming experience raising awareness and funds for Lek’s Save Elephant Foundation, which is pioneering ‘Saddle-Off’ programmes to convert elephant activities into ethical ventures where elephants are treated humanely.

I can quite honestly say that until I met Lek I didn’t know that one person was capable of making such a difference. Lek is transforming the face of elephant tourism across Thailand. When elephant owners see the success of camps that have converted to the ‘Saddle-Off’ model they are — one by one — making the changes for themselves. Save Elephant Foundation helps and supports them in making this transition.

“They are the colour of the planet,” says Lek. “They are beautiful. If we want to protect them, we have to do it right now.”

I find it hard to imagine a world without elephants. But what can we do in the West? Watch Love & Bananas. Join the educated herd. Tell your friends and spread the word. Host a screening for your local community. But more important is what you don’t do. Don’t ride elephants. Don’t buy elephant paintings, or jewellery made from elephant hair. Don’t give your money to trekking camps. Avoid places calling themselves ‘sanctuaries’ that use bullhooks or chains — and lack basic provisions such as food, water and shade.

At Elephant Nature Park the humans do the work, so the elephants can be elephants.

This is Ecotourism. Responsible tourism.

Use your holiday to make the world a better place.

Visit Thailand and see the truth for yourself. Visit real sanctuaries like Elephant Nature Park that run Lek’s ‘Saddle-Off’ programme where you can be with elephants in their natural state. You can feed them, watch them play, walk with them to the river, spend time with them. Be enchanted by their mystery and magnificence. Be in awe of their ancient life force — so delicate and yet so mighty. And in doing this we can discover the wild within ourselves; the great majesty that enables us to value and honour other beings not so different from ourselves.

We can believe in the redemptive power of love; and we too will bathe beneath the stars.