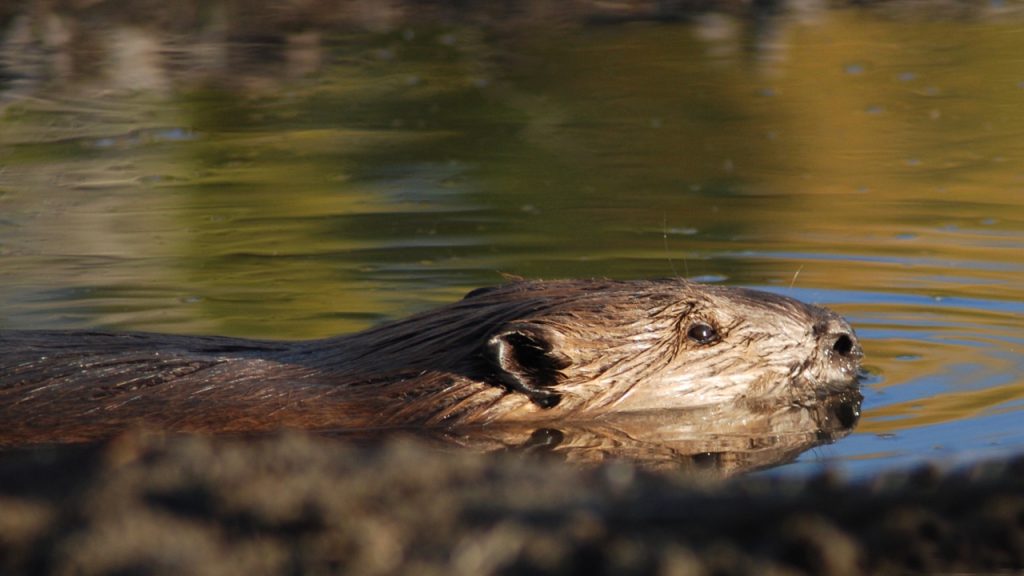 This is my first article and I am cutting my teeth, so to speak, on beavers. Beavers teeth never stop growing, ever. Beavers are always cutting their teeth on something.

While at a Rewilding Dartmoor debate last November, I was fortunate enough to meet a man named Derek Gow who invited Atlas and I to visit him on his farm. Derek is somewhat like a beaver himself, redesigning wild places and opening them up for others to enjoy. He is generous with the habitats he creates, proactive and willing.

The debate was passionate and tense. On one hand you have the farmers, with their grazing rights to the commons, long histories and farm subsidies, and on the other, you have the rewilders; ecologists and tree planters who think increased woodland and the reintroduction of native species would bring back biodiversity. Derek however, is both. He is a rewilding farmer. Derek runs a business that relies on creativity instead of subsidies, diversity instead of sheep. He hosts a lively mix of water voles, otters, wildcats, pine martin, foxes, harvest mice, wild boar, rare black storks, white storks and even a herd of Heck cattle (the infamous Nazi cows) and he is the first farmer in the United Kingdom to have beavers on his land.

We did not arrive in the dusky hush of a summer evening, as maybe we should have, we arrived at 11 o'clock on a cold January morning when the beavers, quite rightly, were asleep.

The riparian landscape that greeted us was quiet, but well used. A slippery beaver path fell down a steep slope towards pools of clear still water. There were peeled white sticks, chewed through trees and a long straight dam that blended in so well it took Derek pointing it out for me to see it. The beavers had been busy. Beavers are continually changing the environment in which they live, transforming the landscape around them into a Beaver Eden. Their crepuscular hours are spent digging canals and constructing organic materials into permeable structures that create habitat, not just for themselves, but for water voles, otters, frogs, toads, kingfishers, heron, dragonflies and fish. The coppice they create brings in light for a number of plants species to thrive and creates deadwood for innumerable insects. Up to forty percent of woodland wildlife is said to need deadwood to survive: birds, bats and invertebrates to name just a few. They restore incised (vertically eroded) stream beds and, as if that weren't enough, they slow the flow of water. The ponds and pools of their beaver generated wetland act like a sponge in times of flood and store water in times of drought and, for the cherry on the cake, they filter pollutants and pesticides from the water, cleaning the very element in which they live, and they do it all for free.

In Native American symbology the beaver is a preserver. A benevolent creature who protects people by creating a dam to hold out invaders and monsters, but there was one monster for which even the beaver was unprepared. The beaver could not hold out man.

The reality is that beavers have been absent from our land for over 400 years. Tidied from our rivers and trapped for their fur and glandular secretions for castor oil, we hunted them to extinction. And we are still holding on to the past. We no longer need their fur, and can now extract castor oil from plants, but concerns over their reintroduction still abound. Anglers have concerns about salmon migration, when there is little evidence to suggest beaver dams affect salmon populations at all. There have been claims that beavers eat all the fish, when beavers eat only plants. In beaver populated areas fish are not only more numerous, but are found up and downstream of beaver dams. There are claims they bring disease, something easily solved by quarantine; and even claims that our rivers are not healthy enough, when it is the beavers who would restore this health. There are claims they cause flooding, when in reality they prevent flash flooding by slowing the water; and there are also claims that their felling of trees, which takes place only along the waters edge, could bring change to human structures.

We don't like change. We want to do what we have always done in a landscape that looks as it has always looked. And change is difficult too; whether it be the change from horse and cart, to motor vehicle, or a change in farm subsidies back to none. Change requires looking at ourselves in a new way, questioning what is important and facing the truth. But change is upon us whether we will have it or not. The landscape of our wetlands has changed beyond recognition, our rivers are dredged and straightened; drained, dried and polluted. There are no water voles plopping gently into the river as we pass by, no moth storms, no glow worms at night. There are fewer and fewer of the species we remember from our childhoods, less wildlife than ever before. We tidy deadwood as soon as it falls, even if it is still living. We shun even the appearance of death. We are losing species and habitats at an alarming rate and we are losing something internal too, we are losing the wild within ourselves.

We must rewild, and we must do it primarily for us. Not just for food, shelter and medicine, but for our wonder and our joy. Derek is confused as to what rewilding really means. Broadly speaking it refers to restoring areas of wilderness to their former glory, or as I like to imagine, to their true potential glory, but it is the reintroduction of some of the larger mammals that is coming to define it. Derek is not sure this is a good thing. Visions require next, beaver-sized, steps and large wolf leaps can be intimidating. We are a small island nation and in our degregated, denuded, humanised landscape many animals, if given the opportunity, will not simply return. They will have to be imported, quarantined, bred and put back in by us. Just like the beavers, we will have to re-create our own Eden.

But the truth is we are not the only ones changing things. There are forces bigger and more violent than us at work, and there are forces smaller too, beaver sized in fact, peaceful, synergistic forces who are not only changing things for the better, but who are doing it better than we do. Their organic structures break down and are restored in 150 year cycles, while we plough on with our expensive impermeable barriers and ineffective flood defences. The beavers can do what we cannot, and I suspect it is for this reason we have resisted their return.

As for the beavers, they have returned regardless. Some are accommodated on private land like Derek's; some are in zoos; some have been released illegally; and others have simply chewed their way out.

Scotland's legal Beaver Trial, and less legal escapees, has resulted in the government giving them native species status in November 2016. This will afford them some protection, although the people who like to shoot them will probably still shoot them. They are now allowed to expand naturally, which I imagine they were busy doing anyway, but it is a start, and an important one.

Back in England we have a rogue population living wild on the River Otter. They are now being monitored by the Devon Wildlife Trust and if they get enough support, our beavers too will be allowed to stay. They are hugely popular in the town of Otter St Mary among children and adults alike, and are already helping a number of local tourist-based businesses to thrive. I will certainly be visiting them this summer, and I suspect I will even contribute and earn a Devon Wildlife Trust fluffy beaver toy for Atlas.

Beavers have been reintroduced right across Europe; Germany has over 30,000 and France 15,000, although numbers are contained where conflict with human systems is perceived. I asked Derek what he thinks about beaver/ human conflict; "It is a conflict of rhetoric," he says. "There is no conflict."

I love rivers. And I am not alone in this, it is the English idyll. Draping willows, sparkling water, and long summer nights; dragonflies, water voles, kingfishers, heron, otters, beavers. We have only to extend our minds. Reach out in all directions, backwards as well as forward through time and the beavers are there, beavering away, doing what beavers do best, transforming their landscape, rewilding their rivers, building from the ground up.

Derek would like to see beavers returned to all major river systems in large numbers. I love his vision. And like warrior poets, the beavers keep building, keep creating, keep transforming their world.

The beautiful chaos the beaver creates may not be in line with our tidy, short-term goals, but it is in line with something much greater. Something more complex, more intricate and more accommodating than most of us can comprehend. The beaver has much to teach us. How to cooperate with others, how to be resourceful, how to be with the chaos without feeling the need to tidy it up. How to hold a vision and be in the unknown. How to do what you love regardless of anyone's opinion. Beaver chaos is the right kind of chaos. It is a wild chaos, and a necessary one. Because if we wish to restore our environment, we are going to need some help, and the beaver is the best place to start. For he already knows what to do and has all the skills with which to do it. And as the beavers build their own Eden, they begin the restoration of ours.